You are here: Home > Blog > Holiday Bilbao
By The Weekend Team in Other Groovy Things 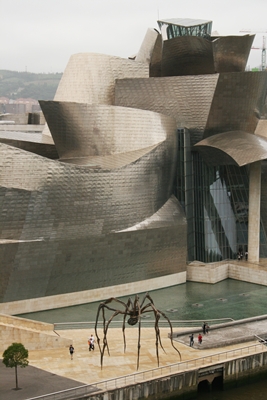 Maman Outside the Guggenheim

For a holiday weekend, Bilbao buzzes, breaking boundaries in art, architecture and gastronomy.

However, you can still unearth history and atmosphere in the winding streets of the casco viejo (the old town).

Wrap up warm, though. Bilbao sits in a valley between green mountains and billowing grey clouds, making the weather closer to England on a summer’s day than the sunny Spain brochure image.

Can an art museum justify a visit to a city? For once, with the Guggenheim, I think it can. This sweeping, swirling masterpiece floats on the riverside like a majestic tin-foil ship. Leave at least half a day to enjoy both the inside and outside of Gehry’s masterpiece. If you can stretch that to a whole day, then so much the better.

Highlights outside include Maman – the giant spider that looms over visitors – and the puppy that guards the entrance (personally, I hated the dog – but apparently I’m in the minority.)

For online tickets to the Guggenheim

The Zubizuri Bridge rises out of the subdued Nervion river like a fish gill in brilliant white. Stand below to watch the turquoise floor project strange shadows as people walk across. And it’s free… 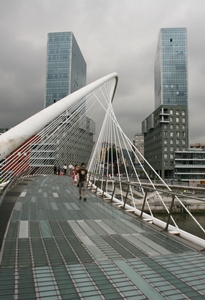 The setup is a little strange – you can only buy single tickets and most of the journey is against a concrete wall – but the hilltop views of the city are excellent. Plus the journey is cheap (0.90 euros, July 2009). From the summit you can see the cloud-flecked city – including, of course – the Guggenheim.

Narrow streets brimming with character make up this part of town. Although historic churches sit snugly between the balconies and lamposts, most people here are eating and drinking – in some of Spain’s best tapas bars. More often than not, tapas in this area is called pintxos (its Basque name – pronounced pinch-oss) and includes bacalao (a salty, yellow cod dish that I would describe as an acquired taste) and chipirones (delicious baby squid.)

And of course, you’re near the excellent wine-producing region of Rioja.

The main sites are within walking distance – whereas parking is a nightmare. Remember to take an umbrella, though. The clouds open fully and venomously with precious little warning….

Even comes with an exercise bike

Follow the usual advice for finding the best hotel deal.

However, I stayed in the HT Petit Palace Arana, which suited me very well. Reasonably priced, fantastic location and a funky, glowing shower door. The unexpected exercise bike in the room also served as a handy coatstand…what more do you need for a holiday in Bilbao?