A Cheap Weekend Break in Marseilles and Cassis 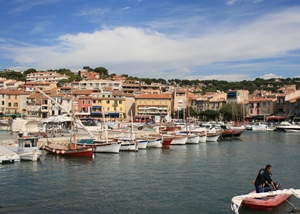 Marseilles has a rough and ready reputation within France, as a rebellious city with an intoxicating spirit. Right along the shoreline, however, pastel-perfect boats wait in formation in the chalk-lined hamlet of Cassis.

Both are worth a visit – and both neatly slot into a cheap weekend break.

Stroll along Quai des Belges in the Old Port, where salesmen flog T-shirts that scream “We are not French. We are marseillaise!”

Take in the city skyline from the Pharo gardens. From here you can see caramel-coloured Fort St-Jean and the elegant Cathédral de la Major. Look out for the statue of a desperate sailor – a symbol of Marseilles.

Face the coastal breeze and walk along the cliffs that skirt around the sleek harbours that were once chalk quarries.

Cassis really seems designed for a postcard photoshoot. Independent restaurants cluster along the harbour and rainbow-coloured boats bob up and down on the waves. Cassis fills up in August but the crowds ease off in June and September.

To see Marseilles, Cassis and the Calanques in one cheap weekend break, it’s usually cheaper to stay in Marseilles and hire a car to drive indepently along the coast.