You are here: Home > Blog > In New York for the Weekend? Don’t Miss These Six Classics
By The Weekend Team in Other Groovy Things

Things To Do in New York in One Weekend

What are New York’s top attractions? If you only had one weekend break in Manhattan, what would you see?

Start spreading the news…..a weekend is far too short to appreciate the Big Apple. At least make it a long weekend, if you can’t manage a week. Between jetlag and a transatlantic flight you may find that 48 hours have passed and you were barely conscious for any of them.

Still, if 48 hours is all you got, watcha gonna do? Make sure you don’t miss the following highlights:

1 – The Statue of Liberty

This green goddess will soak up most of your time. You need to catch a ferry to visit her on Liberty Island and then queue through security to climb her steps. To see her from the water, however, take a free ride on the commuter ferry to Staten Island. 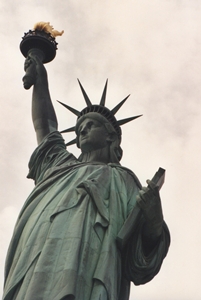 Statue of Liberty - Worth the Effort

New York’s tallest building and one of the Seven Wonders of the Modern World. Worth a look, then. More queues await in the art deco foyer but the views from the observatory are the best in the city.

This bold green carpet stretches right through skyscrapers for over 4km. Stroll or drive around in the day to enjoy street performers and buy pretzels. Flee when the sun goes down, for safety’s sake.

The shiny silver outline of this art deco skyscraper makes it easy to spot from around the city. Robbed of its title as the World’s Tallest Building after only 11 months by the Empire State Building, today most visitors can only get as far as the foyer. That’s OK, though – the best view is of it from the Empire State Observatory. 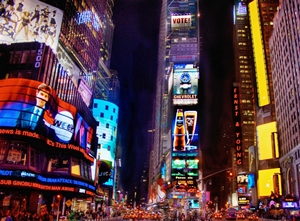 Stand at the intersection of Broadway and Seventh Avenue and let giant digital posters dazzle you.

Once the longest suspension bridge in the world, the Brooklyn Bridge has now become a symbol of New York City. Visit at twilight to watch the lights blink on across Manhattan – but again, it’s probably not wise to hang around.

Of course, there are more attractions in New York. But they may have to wait for another weekend.