The Legend of the Roquefort Caves

If you get given lemons, make lemonade. 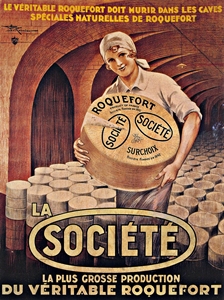 A young shepherd from Roquefort took this idea and expanded it. Or perhaps, given that his version happened hundreds of years ago, invented it.

The legend of Roquefort whispers that the shepherd boy was sheltering from the rain in one of Roquefort’s damp caves, ready to tuck into his curds and rye bread, when a beautiful woman caught his eye.  The amorous Frenchman chased after her, abandoning his already suspect-sounding lunch.

We never learn the details of the chase – was he successful? Was his love requited? Was it even love?

All we know is that something took a hell of a long time. Our shepherd returned to find his lunch covered in a thick layer of blue-green fungus. Revolted but famished, he ate – and discovered the creamy-crumbly cheese that made Roquefort’s history.

Can Roquefort be made anywhere else? 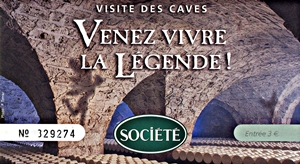 Locals believe, and perhaps they are right, that Roquefort couldn’t exist anywhere else. It’s not just national pride – geography itself constructed these natural cheese cellars when the earth frothed and foamed to create the Aveyron landscape.

Beneath the surface, air currents carved a labyrinth of grottes (caves) with channels that stretch up into daylight. These draughty passages, or fleurines, allow mould to work its magic and turn ewe’s milk curd into the robust Roquefort.

What can a visitor to the Roquefort caves expect?

Today, three main cellars open their doors to the public. I visited the largest and oldest, run by La Société. For three euros, a guide leads you through at least eleven natural storeys in the rock, linked together by narrow, crooked staircases. Water seeps through the walls and a luminous, lime moss grows around the artificial lamps that light the way.

Traditionally, the Penicillium Roqueforti (the name sounds made up, but it’s true!) grows on leavened bread before being swirled into the cheese. Most caves, however, now prepare the bacteria in a lab, yet its musty, pungent scent still haunts the tunnels.

Despite the smell, the sight of disc upon disc of Roquefort extending silently into darkness is amazing.

And the rest of Roquefort?

For a place with an international name, Roquefort remains humble: a simple hamlet, with fantastic views over the nearby rocky causses.

Other restaurants and facilities are rather limited, but it’s only a short drive to Millau, where there’s more choice. Plus you get to see the inspiring Millau viaduct overhead.

Getting to the Roquefort Caves

The closest airport is in Toulouse. From there, the easiest way is to drive. You can visit Roquefort as a day trip from Toulouse but it will seem much less rushed if you stay overnight in Millau.