A Cheap Weekend Break in Ronda

Ronda, a village that sits high above the Tajo gorge in the olive-lined plains of Andalucia, rose to fame with its bridge and clifftop-hugging buildings. Ronda’s size and scenery make it a lovely place to escape to for a cheap weekend break. 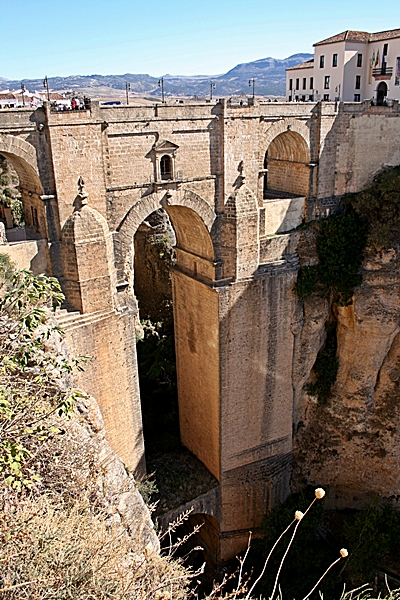 Highlights of a Cheap Weekend Break in Ronda 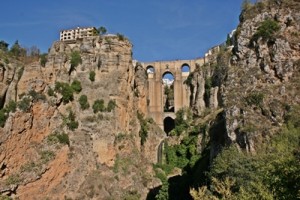 The Puento Nuevo – or New Bridge – is the highlight of a visit to Ronda. Although it appears entirely ordinary when walking or driving across its relatively short length, one glance over the side reveals an almost 100 metre drop to the floor of the Tajo gorge.

To get a great view of the bridge walk around the grounds of Ronda’s Parador, or else follow the zig-zag pathway down into the valley. Be warned, though – there’s no lift so you’ll need to be able to walk back up again.

You can visit inside the bridge, which used to be a prison, for 2 Euros.

Walk to the Arab Bridge

Start at the Convento de Santo Domingo and follow the signposts down to the Arab Bridge. You will pass the honeyed statues of the Palacio de Marques de Salvetierra, the Old Bridge and the Puerte de Felipe V. Sadly, these are no longer functional. But you can visit the arching remains of these public baths, where star-shaped holes in the ceiling let in the light.

Ronda claims to have invented bullfighting – a somewhat controversial accolade for many reasons.

However, Ronda’s bullring is surrounded by spectacular scenery and the museum inside the ring offers one way to get acquainted with this Andalucian event without getting involved with the blood and gore.

You can walk around the bullring, taking stock of the heavy metal gates used for safety and the rather flimsy wooden shields within the ring for hiding behind when the bull charges. Watch out for the deep grooves in the wood and wonder, once again, why anyone chooses to do this…

The restaurants overlooking the Puente Nuevo are, predictably, not that cheap. The Duquesa de Parcent, however, offers excellent value for money as well as a fresh and open view of the bridge – and the drop to the floor of the gorge below. Service, as is often the case in this part of Spain, could be summarized as “the customer may very occasionally, although we doubt it, be right.”

You can find very cheap tapas, however, further out of town by the city walls, where dishes of chorizo in wine or sliced cheese with anchovies cost €1.20 per dish.

Fly to either Seville or Malaga and then drive up to Ronda. The drive takes between 1 and 2 hours depending upon your interpretation of the speed limits and willingness to emulate Spanish drivers on the mountain roads.

Have a great cheap weekend break in Ronda!