A Cheap Weekend Break in Toulouse, the Pink City

Toulouse is one of the best French cities to head to for a cheap weekend break – and I’ll explain why.

Toulouse can provide many of France’s key features – good food, great wine, history, art and atmosphere – but there’s something else. The Pink City (so called because of the way its crumbling bricks glow at sunset) is also the hub of the European aerospace industry. This means that it’s easy to fly to, offers scientific exhibitions as well as fine arts, and – most importantly – functions as a lively international business area.

Why is this important? Because business travellers go home at the weekend. So a trip to Toulouse has the rare and enjoyable pleasure of actually being cheaper to visit at the weekend. Business hotels reduce their rates, car rental firms have last-minute offers – and the restaurants can cater for the locals – and you!

A cheap weekend break in Toulouse

Place Capitole is the central square of Toulouse and the heart of the city. Toulouse hosts concerts here, charitable events, fresh food markets and more. Most of the time, though, it’s a place to sit and watch the world go by (although the cafés around the edge are the most expensive in town.)

You can visit the extravagant function rooms inside the Capitole building for free.

As part of the canal network that connects the Atlantic to the Mediterranean, the Canal du Midi has plenty of leafy green pathways for strolling along or cycling. (You can hire bicycles from opposite the Tourist Office in the centre of Toulouse.)

Open until 1 p.m at the weekend, Victor Hugo market is the largest in southwest France. A visit is not for the squeamish, however, as stalls stock skinned rabbits and lamb’s brains, as well as the more picturesque baguettes and macaroons. The restaurants on the top floor offer great value, using food fresh from the market below.

The Cité de l’Espace mixes the idea of a museum with a theme park on the outskirts of Toulouse. Although primarily aimed at children, there’s plenty to keep adults entertained, with planetariums, space gyms, life-size space ships and scientific exhibits. Tickets are fairly expensive but most people want to spend at least half a day, if not a full one, inside.

This French Gothic church has housed both the relics of Thomas Aquinas and Napoleon’s armies. Today, it’s worth a look for its lofty palm-tree pillars and Les Jacobins’  mirror effects. 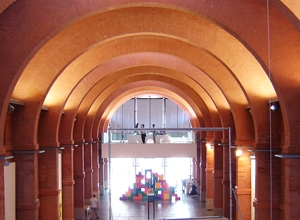 No, not a grisly meat factory. At least not anymore. Today Les Abattoirs is a museum of modern art, with exhibits that frequently change. Next to a picturesque park and the river, its buildings make for an atmospheric visit each time. As for the contents of the museum – that varies.

This huge Romanesque church may have a grisly history (St Sernin was martyred here by being dragged through the streets tied to a bull) but today its pale pink walls offer cool relief from the hot summer sun.

Beside the River Garonne

Shaded by trees, a walk along the river takes in the pink walls and domes of the old city as well as elegant and popular restaurants, cafés and bars. It’s a lovely way to finish off a cheap weekend break in Toulouse.

Other Ideas for Cheap Weekend Breaks