You are here: Home > Blog > One Weekend in Rome – The Sights You Can’t Afford to Miss
By The Weekend Team in Other Groovy Things

Rome has so many attractions – how can you see them all in one weekend break? You can’t. And that’s why you need to focus…

The problem with Rome is that it’s so beautiful, so busy and so completely dripping with history that people get carried away. It’s so difficult to narrow down Rome’s highlights that guides squeeze in an extra one, or two, or three…but then feel guilty for leaving something else off…and add another back in.

I’m going to be strong. If you only have one weekend in Rome, then these are the absolute essentials. Otherwise, you reach the end of your 48 hours disappointed that you missed something crucial, like… 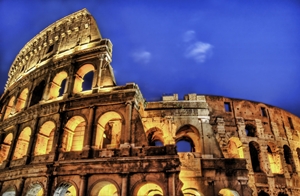 After almost 2000 years, the largest amphitheatre in the entire Roman Empire still stands (mostly). Through its sweeping oval curves and cascading tiers of arches, the colosseum demonstrates the might – and the intimidation – that was ancient Rome. Walk where gladiators once did during the day and then drive past at sunset, to see this beautiful menace illuminated against the sky.

The hand of God stretching out to infuse life into Adam must be one of the most well-known images in both the world of art – and the world of souvenir shops. Created by Michelangelo on the ceiling of a private papal chapel, this masterpiece has earned its convoluted queues and waiting times. Happily, while waiting, you shuffle through the opulent corridors of the Vatican Museum, allowing you a brief glimpse into the immense collections of art and wealth gathered by the Catholic Church. Creation of Adam, The Sistine Chapel

To see the entire fresco come to life above your head is an unforgettable experience, far more rewarding – in my opinion – than the Mona Lisa in Paris.

The church that, according to tradition, marked the grave of St Peter has grown over the centuries into a resplendent monument that seats over 60 000 people for a single service. Sunshine slants through its magnificent dome onto the panelled marble floor with absolute radiance – a spectacle that reminds you once again of the extraordinary influence that this corner of the world continues to exert. 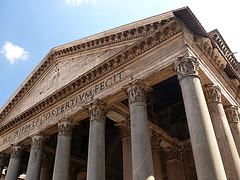 Those columns and those chiselled letters define the image of ancient Rome – at least in my head from the storybooks I read as a child. Inside this exalted tomb, you can find some cool relief from the hot, traffic-logged streets and admire the graceful elegance that has survived through 20 centuries.

Once you’ve seen those, relax and feel free to throw a coin in the Trevi fountain for luck, drift past the Spanish steps or simply relax in one of the many sunlit piazzas.

Rome has plenty to offer for a weekend city break. So much, in fact, that you may decide to come back for another weekend in Rome…

Why Brighton Rocks
Top Cardiff Attractions for a Weekend Break